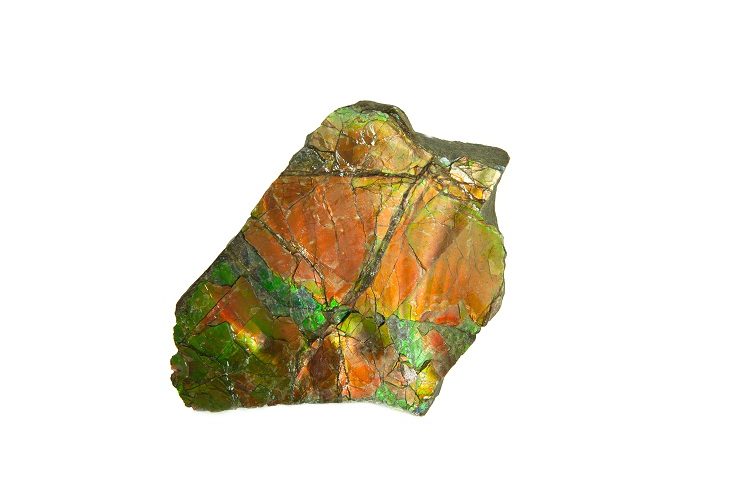 Ammolite is one of the rarest gemstones in the world. Often referred to as Ammonite, the mineral belongs to a group of organic stones; within the group are also coral, jet, pearl, and amber. The gem is created from fossilised ammonite shells. Typically, they are composed of the same material as nacreous pearls – Aragonite. In India, Ammolite is known as ‘aapoak’. This name is thought to derive from an Indian word meaning ‘small crawling stone’. The stone also has a range of trade names including Gem-Ammonite and Calcentine. In recent years, the stone has also been referred to as ‘Korite’, after the largest commercial provider of Ammolite – ‘Korite International Mining Company’. Boasting a beautiful iridescent appearance, fine-quality Ammolite is popular worldwide. Most gems exhibit colours of green and red, though specimens can be found in almost every colour of the rainbow. Some Ammolite stones have a rough, flaky surface; while this is perfectly normal for lower-grade specimens, stones of this nature will hold the lowest value. Typically, top-quality Ammolite will not exhibit any visible matrix. Getting your hands on a good-quality piece of Ammolite can be tough, and this problem is only expected to get worse. Within the next 20 years, all Ammolite deposits are expected to be exhausted. In this article, we explore the opal-like gemstone in more detail.

How to Identify Ammolite

Ammolite is a fairly easy stone to identify, even for the untrained eye. The iridescent nature of Ammolite is a result of the stones microstructure. In most iridescent gemstones, the effect is caused by light absorption; however, the iridescence of Ammolite is the result of natural light rebounding off different layers of the stone. Because of this, Ammolite can easily be distinguished from other iridescent gemstones. Occasionally, Ammolite is still confused with other stones that are similar in appearance. Notable culprits include Labradorite, Spectrolite, and Opal. However, Labradorite usually shows colours of blue and purple, whereas Ammolite typically occurs in red and green. Ammolite can usually be distinguished from Spectrolite and Opal by its unique visible structures.

Different Colours and Types of Ammolite

Though the base colours of Ammolite as typically red and green, the exact hues will vary depending on the specimen. The iridescent appearance of the stone means that it will appear different colours depending on the angle of light and the angle the stone is viewed at. When the stone is rotated, it will exhibit a broad spectrum of colours. Some specimens only show hues of the same primary colour group; stones of this nature are categorised as ‘Monochromatic’. Stones that exhibit the whole colour spectrum are known as ‘Spectrochromatic’. Spectrochromatic stones tend to boast the highest value.

While Ammolite is an organic gemstone, stones are often enhanced by ‘layering’. Without undergoing this process, Ammolite is too delicate to be used in gemstone jewellery. Laying is a popular method of enhancement within the gemstone trade and is most commonly used for opals. In addition to increasing durability, layering can also enhance the colour and quality of the stone. Other ways to stabilise the stone include the use of resins, polymer, and lacquer.

Where is Ammolite Found?

Today, most Ammolite is sourced from a single location. While smaller deposits of the stone can be found in various other countries, over 90% of the worlds Ammolite comes from Alberta, Canada. As mentioned previously, Ammolite deposits are expected to be exhausted within the next 20 years. This means that the gemstone is officially considered one of the rarest stones in the world. Before the 1980’s, Ammolite wasn’t an official gemstone. As soon as the World Jewellery Confederation declared the gem official, Ammolite mining increased to a commercial level.

Like most gemstones, Ammolite boasts a range of healing properties. With this in mind, the stone is popular for use within crystal healing. Ammolite has been used for this purpose for hundreds of years. The stone was named the ‘Buffalo Stone’ by the Blackfeet Indians, as they often found specimens washed-up on the shore with markings that resembled a buffalo. Back then, buffaloes symbolised health, wealth, stamina, and power. Because of this, the Blackfeet Indians believed that Ammolite held powerful healing properties.

After the commercial population of the stone in the 1980s, Ammolite was often used for feng shui. Referred to as the ‘influential stone’, practitioners used the gem to cleanse and detoxify the body with energy, or chi. Ammolite was also labelled the ‘Seven Colour Prosperity Stone’. Specimens were believed to hold different types of energy depending on their colour.

Today, Ammolite is still used within crystal healing. The stone is often used to change negative energy into positive, and clear energetic blockages from the body. Additionally, the gemstone is believed to ease discomfort during childbirth, relieve symptoms of depression and anxiety, and ward off harmful thoughts from the mind. When used to cleanse the chakras, Ammolite works best with the root/base chakra.

Good-quality Ammolite is loved worldwide. Today, the most notable deposits of the stone are found in Alberta in Canada, though smaller deposits can be found in other locations around the world. Loved for its red-green colouring and iridescent appearance, gem-quality Ammolite is often used in designer jewellery. Whether you’re hoping to use the stone for its benefits within crystal healing or you’re looking for a beautiful new addition to your jewellery collection, purchase a beautiful piece of Ammolite to reap the benefits. 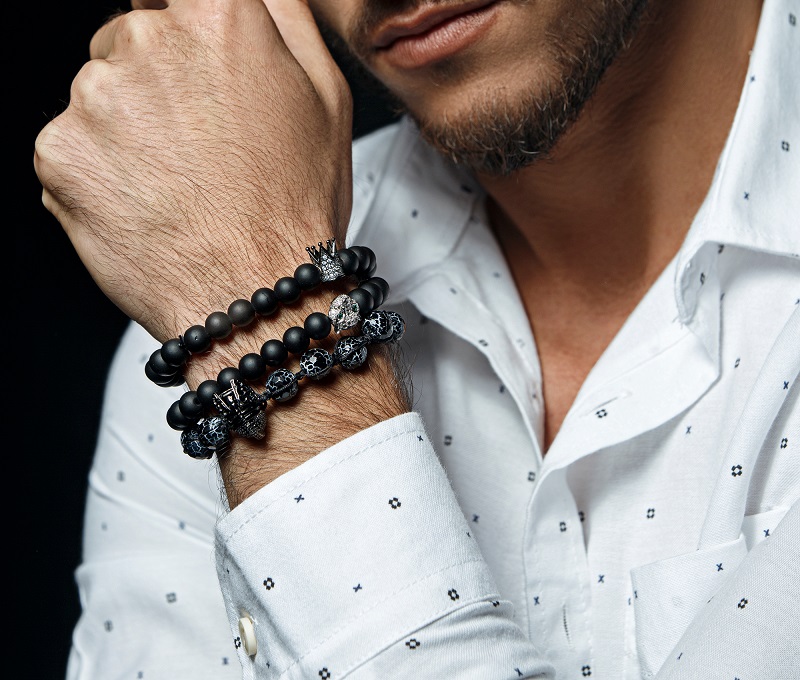 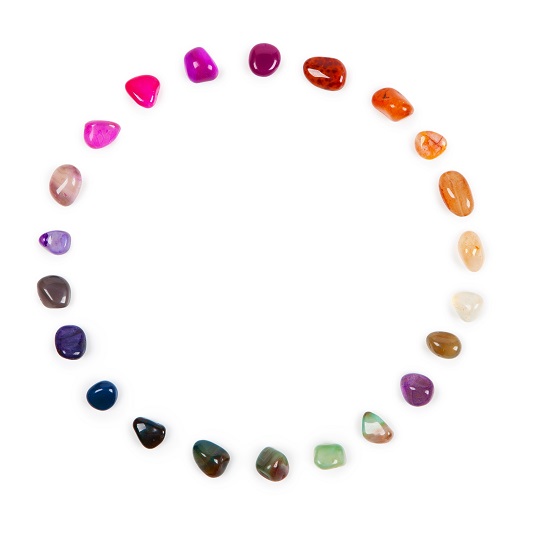